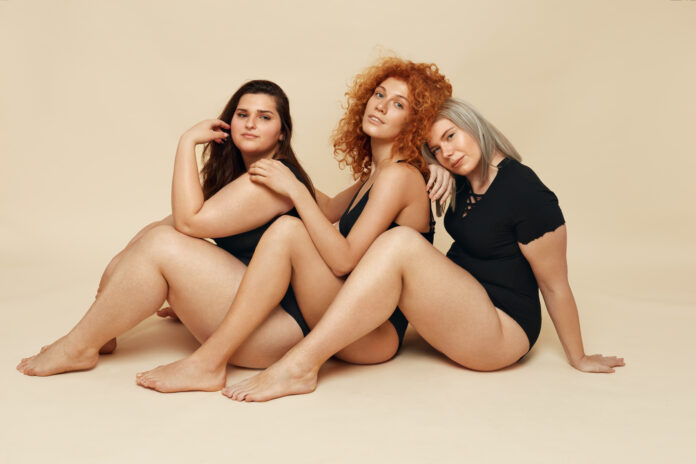 At a wedding reception a girl said, “I have a silhouette. It’s round.” And everyone laughed. When I got home, I got to thinking about that comment and suddenly, it was not funny, it turned into a sad comment on how we see ourselves. In the 1990s Calvin Klein added to women’s body shape paranoia by stating that women over size ten should not wear jeans.

What a terrible thing for girls to hear such a tactless remark. Those who wanted the comfort and freedom of movement that jeans given themwere reluctant to wear them in public for fear of being laughed at if they were bigger than a size ten. Society, and the movers and shakers of the fashion business, have a lot to answer for. They’ve given girls a twisted view of what their body should look like.

The Barbie doll’s message was that the perfect body shape is quite large breasts, a small waist, a flat tummy, and long legs that go up to her armpits. Men fantasized about getting Barbie doll bed partners and girls developed eating disorders hoping to obtain the lustworthy type of shape that caused men to drool and fall at their feet.

One thing was clear

Even if a woman had a stunning body, did not have an ounce of fat, and was the ideal weight, the majority of those women still saw themselves as having to shed five or ten pounds. It’s embarrassing to have to admit that girls used to permit men to dictate the current styles and colours worn each season. They did so by not producing anything else , if there were additional styles and colours, they were not too exciting.

I recall when celery was the colour the designers decided that girls should wear this season. If they wanted to be in fashion, it meant that for that season, they would not wear any other color. Most women did not have the type of serious money it would take to replace whatever is in their wardrobe.

Consequently, those girls bought only a couple of celery-colored outfits that year and wore them for important events. If they wanted to be in vogue every day, it would have meant throwing out their clothes which was not this sickening shade of green.

It’s amazing the year that celery was the colour in fashion, if they wanted to look stylish, women allowed themselves to be dressed just like something they would add a salad. And needless to say, gloves, hats, and shoes were dyed to match. Thenthere were the mini dresses. During those years, the only dresses which were shown in shops were those who were several inches above the knee.

Women in their sixties, seventies, and outside, who did not want to seem foolish wearing dresses that came up to their navel, remained away from shops in droves. But I think the worst thing to hit the marketplace then was that the one-size-fits-all pantyhose. It was a complete affront to all body contours. Imagine, if you will, a woman who wears a size eighteen leaving half of her belly hanging over the waistband of her pantyhose and another half of her abdomen meeting the bottom portion of her crotch as she struggles to squeeze herself into this one-size-fits-all pantyhose.

The worst part about this entire situation is that girls, like lemmings, have always followed the trend leaders to unflattering styles and colours annually, irrespective of their body shape and colour. They’ve enabled designers to define their understanding of these. They’ve allowed themselves to get unhealthy eating habits, to develop eating disorders, and to take somebody else’s idea of what’s beautiful. Perhaps someday, girls will be self-confident and not allow other people to define their perception of attractiveness.