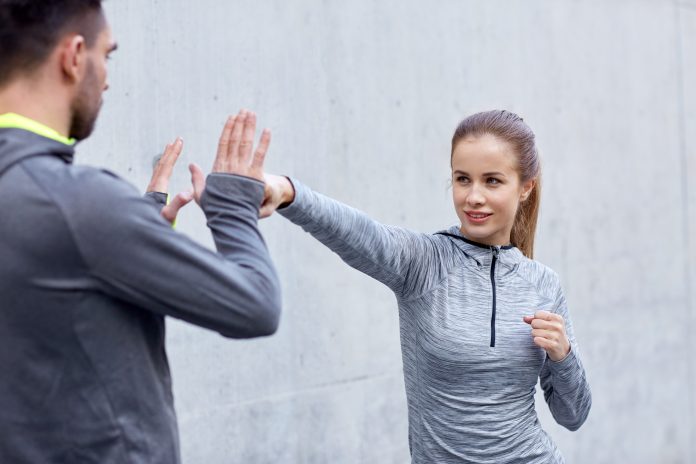 After viewing about a half a dozen young girls out jogging yesterday evening, I was anxious for my keyboard. This guide is sort of aimed at girls, however, MEN, you to have to worry and prepared! If not for yourself, the ones you love. I was outside yesterday evening, along with my wife, searching for somewhere to walk.

I had read about a linear park in city that wound through a “green” area just east of downtown. According to the map, it ran about two miles, beginning just north of the High School and ran behind the college along side a creek, through a wooded area, ending just south of town. We found the parking place, and started out. It was a quite evening, amazingly cool for Sept 2nd.

I was surprised by how few people were enjoying the night in such a great setting. After crossing an open area, the walking path went over a quaint small covered bridge which spanned a creek, then the forests became very dense on every side. A young girls in her early twenties, was the first to cause me concern. She jogged on beyond us, wearing sweats. She wasn’t carrying anything in her hands. There were no lumps in her pockets. It was about 30 minutes before sundown.

Long shadows fell across the path. Dense forests were on every side. A couple of minutes later another young girls passed us from behind. She had a mind set on, I suppose listening to music. As we arrived behind the high school, there were several adolescents playing tennis, others getting in some batting practice. Then the trail led back through a few more heavily wooded areas. We could see the sun setting so we headed back.

At least four young girls, six in all, handed us coming or going to the mountainous area. There was one middle aged gentleman in sweats, who appeared to be resting on a seat near where we turned around. He seemed harmless, but he aroused my suspicions. This area was ideal for an assault!

Plenty of good hiding places. Parking lot and roads nearby, for the poor guy to get off quickly. A target rich environment. Few enough people to be witnesses. As far as I could tell, none of those young women appeared to be carrying anything with which they could defend themselves. Rape isn’t a”hot” crime. Some of the potential victims wore sweats, some wore gym shorts. It makes no difference.

Are they asking for trouble? No of course not. This is one of the very conservative small southern cities, nothing ever happens here perfect? Oh yes it does! Crime just does not happen every day or week just like state in New York or any large city, but it does happen! Just last week we had an armed robbery of a Video rental shop, not a 1/4 mile from the high school!

The man escaped city, but was captured several countries away in Kansas! He was charged with numerous robberies throughout Alabama. He was just passing through. The perpetrator wasn’t from the little town! Each of those young girls should have been with someone else or they ought to have had a Common Sense Self Defense security mindset. It would have been so simple for them to have been carrying some sort of self defense thing. This is the important part.

Be ready! I still wouldn’t advise women to be out in remote areas by themselves, but in the event you have to do this, then BE PREPARED! MEN, get a stun gun to your loved one. Teach them to use it and prepare yourself because you love them! Get a survival mindset! NO, I’m not saying you have to “live in Fear”.

You won’t live in fear if you’re ready, and practice being ready! Oh it might seem sort of different, type odd at first, you know, searching for a mugger behind every bush. No, it does not have to be like that. It’s just like anything else you practice forsports, anything. If you exercise for it and you’re ready, IF it should happen, your defense will be automatic. I understand because I lived numerous attacks as a Law Enforcement Office in Southwest Florida.

I did so and trained others to do, by being ready. Practicing, training with roll playing, thinking and planning what you will do if confronted by a dangerous situation. We used to take our rookies into an old abandoned ware house. We’d have them act out like they had a telephone, an armed thief was indoors. It was great training! And about a year later when the building was remodeled and occupied, you guessed it, a burglar was caught, inside by the officer I had trained!